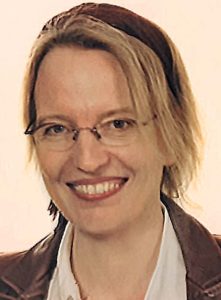 Birgit Eckenweber works as an opera- and drama director since 2000 at various theatre- and opera houses in Germany, Austria and Belgium. Her productions are also shown in Switzerland and in the Netherlands. Her broad experience includes operas such as „La Bohème“, „Così fan tutte“, „Le Nozze di Figaro“, „L’Elisir d’Amore“, „The Merry Wives of Windsor“, „The Merry Widow“, „Kiss me, Kate“ and among others the cantata „A Ceremony of Carols“ by Benjamin Britten. She has further directed contemporary music pieces such as György Ligetis „Rondeau“ or Charles Ives „Unanswered Question“ as part of a scenic concert. In 2019 she directed at the Konzerthaus Berlin the first performance of the children opera „The Gruffalo“ based on the book by Axel Scheffler and Julia Donaldson composed by Iván Fischer. Furthermore she wrote a prologue to the children opera on behalf of the Konzerthaus Berlin. In 2022 she directed „De Gruffalo“ at the Concertgebouw Bruges in collaboration with the Spectra Ensemble Ghent and the Internationale Kunstcampus deSingel in Antwerp. 2022 this production will tour to Benelux.

Birgit directed Engelbert Humperdincks „Hansel and Gretel“ in 2008. Having visited her performance, Peter Konwitschny invited her to direct the same opera in a new stage production at the Oper Leipzig in 2010. This production is very successful and is being performed in 2022 since 13th years. For this opera production Birgit has earned the distinction “the stage-director who has a sense of sensitive effects is a promise of upcoming stage productions” (Nordbayerischer Kurier) in 2010. She subsequently directed the second part of the stage production Johann Sebastian Bachs Cantata „Selig ist der Mann“ directed by Peter Konwitschny with the title „Von Träumen und Trophäen“. This production illustrates the life and the songs of Alma Mahler. Birgit has written the play about Alma herself on behalf of the Oper Leipzig. The critics (klassikinfo.de) have reviewed Birgit Eckenweber’s opera production as a “remarkable portrait of Alma Mahler. Birgit Eckenweber succeeds in showing the utmost various facets of the labyrinth of soul of Alma”.

Birgit studied music, theatre and philosophy at the university of Bayreuth and did her Magister Artium with Prof. Dr. Sieghart Döhring about „The music as mimesis of love and death in the newest history of opera“. During her studies she assisted high-profile directors for theatre and opera productions at the Komische Oper Berlin, Semperoper Dresden, Hamburgische Staatsoper, Burgtheater Vienna and the Bayerisches Staatsschauspiel Munich. This includes the work of Ruth Berghaus, Amélie Niermeyer, Claus Peymann, Harry Kupfer and Marco Arturo Marelli. At that time she started to direct various stage plays of Anton Cechov, Arthur Schnitzler or August Strindberg.

After her studies she was employed as dramaturg at the theatre in Stendal. She subsequently worked there as a drama director for several years. Birgit has been promoted shortly after starting to work at the theatre to lead the dramaturgy what she did for three years. During that time she was additionally teaching arts at the academy Magdeburg. Besides her work in Stendal and Magdeburg she interviewed artists at the opera festival in Bayreuth during the summer festival season from 2004 until 2011 which have been published in the magazine “Festspielnachrichten”.

Birgit Eckenweber was working as a dramaturg at the theatre in Plauen and Zwickau from 2004 until 2010. In this role she was responsible for three main divisions: opera, ballet and concerts. During that time she additionally directed stage plays and did her début as an opera director with Benjamin Brittens children’s opera “Let’s make an opera”.